This 11 days tour will take you to Eastern-Central Bhutan via  east-west highway that’s been carved out of the mountain face, breathtaking views of terraced farmlands, deep river valleys and precariously perched farmhouses are laid out before you.

This is the absolute grandeur of the remote mountain kingdom of Bhutan that has resisted modern influence for centuries to preserve its rich and unique culture and environment. The wide, flat valley of Gangtey hidden deep within the country’s mountain landscape is an idyllic paradise where you’ll witness villagers going about their daily lives unaffected by the stresses of modern life. You’ll also meet the novice monks learning the ancient traditions of their religion; visit the 12th-century temples of Thimphu; explore the monasteries of the valleys of Bumthang; journey to the fertile villages on the banks of the Pho Chu ad Mo Chu rivers and much more.

This journey through Bhutan showcases the many natural wonders and diverse people of the land that time forgot. By day you’ll hike the fields and forests of the pristine countryside, but by night you’ll rest and recharge at a range of locally owned hotels that span charming, locally-run boutique properties, authentic village lodges and comfortable modern resorts. And your knowledge guides will be there every step of the way to guarantee your comfort and enjoyment.

Trip At A Glance

Arrive at Paro, drive on to Thimphu(2,400m/7,875ft) - the capital town of Bhutan. Thimphu is a lively place and an interesting combination of tradition and modernity. Home to civil servants, expatriates and the monk body, Thimphu maintains a strong national character in attitude and architectural style. The drive to Thimphu takes about an hour & half. Upon reaching Thimphu you will be checked into a hotel, and after a brief rest we will visit the :

The chorten was originally the idea of Bhutan’s third king, H.M. Jigme DorjiWangchuck (“The Father of Modern Bhutan”), who had wished to erect a monument to world peace and prosperity, but was unable to do so in his lifetime.

The “Fortress of the Glorious Religion” was initially erected in 1641 and rebuilt by King Jigme DorjiWangchuck in the 1960s. Tashichhodzong houses

some ministries, His Majesty’s secretariat, and the central monk body. It is open to visitors during the ThimphuTsechu (held in autumn) and while the monk body is residing in its winter quarters at Punakha. You can spend the latter part of the evening strolling through the city center.

After breakfast begin your day of sightseeing with a visit to the weekend market to see local people selling and purchasing their staples. The market also has a few souvenir shops for visitors. Then embark on a drive 12 km north of Thimphu where you will participate in an hour long hike to Cheri Monastery. There will be enough time for individual contemplation, journaling, meditating, etc while visiting the monastery. Later, drive back to the hotel or to a local restaurant for lunch. In the afternoon observe traditional paper making from Daphnia and Edgeworthia shrub, and have a chance to purchase some beautiful writing sets from the factory. Next, visit the Handicraft Bazaar, a new project initiated by the Government that promotes locally produced handicrafts. Buy stunning kiras which can be used as bed covers or wall decoration, jewelry and much more.  Finally, visit Memorial Chorten built in 1974 to honor the memory of Late King Jigme DorjiWangchuk, popularly known as the Father of Modern Bhutan. A multi-storied Stupa will introduce you to the vitality of Tantric Buddhism. Finish up back at your hotel. (B, L, D)

After an early breakfast, we will drive up to Dochula pass (3,088m/10,130ft) stopping briefly here to take in the view and admire the chortens, Mani walls, and prayer flags which decorate the highest point on the road.

If skies are clear, the high Himalayan peaks, towards the northeast will be

revealed in all their glory. On a clear day, the following peaks can be seen from this pass (left to right): Masagang (7,158m), Tsendegang (6,960m), Terigang (7,060m), Jejegangphugang (7,158m), Kangphugang (7,170m), Zongaphugang (7,060m) a table mountain that dominates the isolated region of Lunana, and finally, Gangkar Puensum, the highest peak in Bhutan at 7,497m. After crossing the Dochula pass, we reach the village of Lobeysa, where we will hike to the nearby ChimiLakhang, a temple dedicated to the “Divine Madman”, an eccentric monk from the 16th century famous for many his many amusing, Rabelaisian stories. From there on: Punakha Dzong: Punakha dzong is the most beautiful Dzongs in the country build by ZhabdrungNgawangNamgyal in 1637. It is located between two rivers Phochu (Male river) and Mochu (female river). It is central monk body’s winter residence and the district administration center.(B, L, D)

Today we start early and drive on towards the valley of Bumthang. This lovely valley is the religious heartland of the nation and home to some of its oldest Buddhist temples and monasteries. Tales of Guru Padmasambhava and the tertons (“religious treasure-discoverers”) still linger in this sacred region. The drive continues across Pele la Pass (3,300m), the traditional boundary between east and west. We stop for hot lunch at ChendebjiChorten , a Bodnath style

stupa with eyes painted at the four cardinal points built in the18th century by Lama Shida. We will also stop to visit the Trongsa Dzong, the largest in Bhutan and built in 1647 that houses the local administration and the monastic body. And along the route, if time permits, we will also stop at Chume weaving Centre, from where you can get typical woolen products from Bumthang valley.(B, L, D)

Today we will spend the day with visits and hikes to some of the most important Buddhist sites of the Kingdom. Our journey will take us to the: Jambey Lhakhang: This monastery was built in the 7th century by the Tibetan king, SongtsenGampo. It is one of 108 monasteries which he built to subdue evil spirits in the

Himalayan region. Its present architectural appearance dates back to the early 20th century. A short walk from here will take us to the Kurje Lhakhang. Located further along the valley, Kurje Lhakhang comprises three temples. The one on theright was built in 1652 against the rock face where Guru Padmasambhava meditated in the 8th century. The middle temple is built on the site of a cave containing a rock with the imprint of the Guru’s body, and is therefore considered to be the most holy. The temple on the left was built in the 1990s by H.M. AshiKesang, the Queen Mother. These three temples are surrounded by a 108-

chorten wall. We then move on towards the Tamshing Lhakhang.

Located across the river from Kurje Lhakhang, this temple was founded in 1501 by Terton Pema Lingpa, a re-incarnation of Guru Padmasambhava. There are

very old religious paintings around the inner walls of the temple, which were restored at the end of the 19th century. We end our walk here and drive back to thehotel for lunch. After lunch, we will drive on to the JakarDzong.

Constructed in 1549 by the great grandfather of the first Zhabdrung, the dzong was initially built as a monastery.

It was upgraded in 1646 after the Zhabdrung had firmly established his power. JakarDzong is now used as the administrative center for Bumthang valley, and also houses the regional monk body We spend the rest of the day at leisure in the small town of Chamkhar.(B, L, D)

Today we route back to Pelela Pass (altd. 3,300 m) via Gangtey. Phobjikha is one of the few glacial valleys in Bhutan and roosting home of the black necked crane, which migrates from the central Asiatic Plateau to escape its harsh winters. Explore Phobjikha and also visit to Gangtey Monastery, the only Nyingmapa

Monastery in Bhutan. After the visit we will drive on towards Punakha for dinner. (B, L, D)

We will retrace our steps towards Paro valley. Along the way we will stop at the

SemtokhaDzong, “the place of profound tantric teaching”, that stands on a hillock on the town outskirts. Upon reaching Paro, we will take a walk along the streets of Paro at leisure. (B, L, D)

Today, you will visit Ta Dzong, originally built as a watchtower, which now houses Bhutan’s National Museum. The extensive collection includes antique thangkha paintings, textiles, weapons & armor, household objects and a rich assortment of natural and historic artifacts. Walk down the trail to visit RinpungDzong, which has a long and fascinating history. Along the wooden galleries lining the inner courtyard are fine wall paintings illustrating Buddhist lore, such as the legend of the four friends, the old man of long life, the wheel of life, scenes from the life of Milarepa, Mount Sumeru and other cosmic mandalas. Along the way you will also see the 7th century Kyichu Lhakhang, one of 108 temples built in the Himalayas by the Tibetan king, SongtsenGampo. The building of this temple marks the introduction of Buddhism in Bhutan. In the evening visit a traditional farmhouse for an opportunity to interact with a local family and gain insight into the local lifestyle and cultures. (B, L, D)

Today you will embark on an excursion to view the spectacular and famous Taktsang monastery known as Tiger Nest. The trail to the monastery climbs through beautiful pine forest with many trees festooned with Spanish moss and the occasional grove of fluttering prayer flags. The hike will take you past a small cafeteria if a break is needed.  Built in 1600’s, this incredible monastery clings to the edge of a sheer rock cliff that plunges 900 meters into the valley below. It is believed that, in the 8th century Guru Rimpoche, the tantric mystic who brought Buddhism to Bhutan, landed here on the back of a flying tigress to subdue a demon. Guru Rimpoche is believed to have meditated here for three months and this place is considered as a ‘Mecca’ for Buddhists. Lunch will be served at the cafeteria. After the hike, we will pay visit to the ancient ruins of DrukgyalDzong. The Dzong was destroyed by fire and left in ruins as an evocative reminder of the great victories it was built to commemorate. There were several unsuccessful attempts to invade Paro by the Tibetans from the north. The fortress was featured on the cover of the US National Geographic magazine in year 1914. The fortress served as an administrative center until year 1951 when a fire brought it down. From here, on a clear day, you can get a magnificent view of the Mount Jumolhari. Drive south to SatshamChorten, built in memory of the late DilgoKhentseRimpoche, and continue on to Kyichu Lhakhang, built in seventh century by Tibetan King SongtsenGonpo. This evening, once back to your hotel, you can take a leisurely guided walk of the town of Paro.(B, L, D)

After Breakfast transfer to the airport for our flight home. (B)

We at Earthbound Adventures carefully choose hotels that are safe, clean and ideally located, we stay in charming locally owned 3 stars hotels with great and friendly service. We go to great length to make sure the hotel are up to our high standard, we personally visited each and every hotel on our list and we are constantly evaluating the hotels we stay in.

We are listing 4 and 5 stars hotels, if you choose to upgrade your hotel an additional fee will apply to the tours according to the hotels you choose. 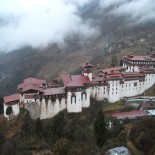 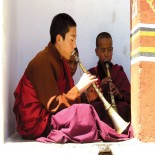 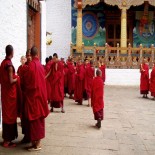 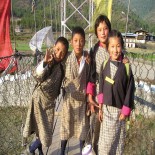 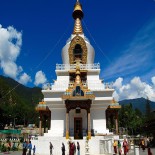 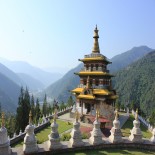 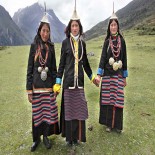 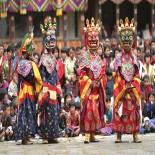 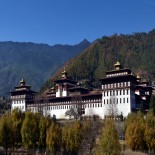 Included in this trip:

All meals as in Itinerary: B=Breakfast, D=Lunch, D=Dinner

All entrance fees to sites

One mineral bottle per day per person.

Air tickets of any kind.

Extra expenses or loss due to nature and unforeseen events beyond our control.

Other Destination in Bhutan

Founded in 1994, Earthbound Adventures is a pioneer in eco-tourism and a leading adventure-travel company offering unique treks and tours to South America. Whether you dream of swimming with sea li